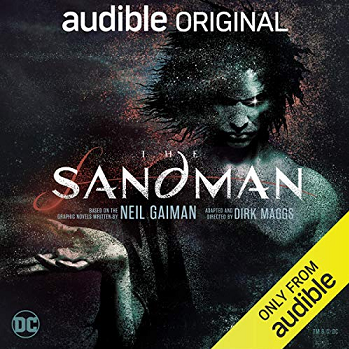 A multi-part Audio Adaptation of The Sandman (1989), written by author Neil Gaiman, directed by Dirk Maggs, and scored by James Hannigan for the audiobook platform Audible. Though billed as an audiobook, the adaptation is closer to an Audio Play, as it features a full voice cast, a score, sound effects, and comprehensive narration (provided by Gaiman) in lieu of the comics' rich visuals.

Like the comic, the audiobook follows the titular Sandman aka Morpheus aka Dream (James McAvoy), one of seven nigh-immortal beings known as the Endless tasked with maintaining fundamental universal functions — and his dominion is the dreams of all living things.