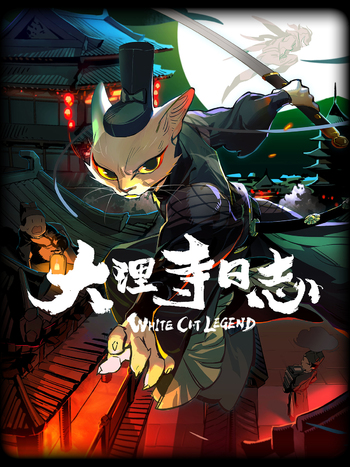 White Cat Legend (original title Da Li Si Rizhi, The Journal of Dali Temple in English) is a Chinese webcomic, or manhua (Chinese comic book). The webcomic was adapted into a donghua (Chinese cartoon) by animation studio Nice Boat Animation, known for their work on Fog Hill of Five Elements.

The story takes place in China during the Tang dynasty, ruled under Empress Wu Zetian. One simple peasant named Chen Shi arrives in the city of Luo Yang in search of his older brother, who he has never met before in his life. Being a poor man with little money to spare, Chen Shi applies for a job at Dali Court as a factotum (an employee/assistant responsible for doing all kinds of work given to them). Unbeknownst to him, his first task is providing food and water for a prisoner, a demon in the form of a human-sized cat. According to legend, once every nine years, a cat grows a new tail. Once it has grown its ninth tail and reached the age of 81, it transforms into a vicious cat demon, capable of devouring its prey and taking on their form. When a cat demon has consumed enough human beings, it can shapeshift into anything it wants and plunge the whole world into chaos.

Chen Shi is absolutely terrified of what he’s guarding, but he refuses to give in to his fear because he needs the money. A few days later, he checks up on the prisoner, only to find the cell is unlocked and the captive is nowhere to be seen. Suddenly, Chen Shi is attacked by the cat demon and forced to give him the key to unlocking the chains around his feet, but the factotum stands his ground and swallows the key, which catches the demon off-guard. A man named Lu Na then enters the dungeon and speaks to the escaping prisoner as if he was an acquaintance. It turns out it was all a test to see if Chen Shi had what it takes to be a loyal servant of Dali Court, and he passed. The cat demon’s name is Li Bing, who is atoning for the sins of his family. Because of his loyalty to the empress, he is appointed Vice Minister of Justice, and declares Chen Shi his assistant. Together with the rest of Dali Court, they solve various cases left unfinished.

The first season premiered on April 10, 2020, with twelve episodes aired up until July 3. You can watch the series legally on Billi Billi with English subtitles HERE

. The original manhua can be read on the same website HERE

, though entirely in Chinese and unavailable in any other language.