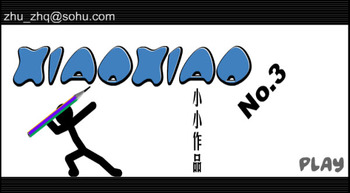 Before countless stick figure animations... there was only Xiao Xiao.

Xiao Xiao is a flash series created by Zhu Zhiqiang, a Chinese animator. The movies consist of stick figures fighting each other in choreographed scenes. There's not much else to it; people beating the crap out of each other is its only highlight. And what a highlight it is as it gained a lot of popularity in Newgrounds during the early 2000s. It can be found here

After a healthy nine episodes, the series was discontinued in 2002. Zhiqiang was last heard to be animating advertisements for Chinese companies, namely Heineken's Chinese branch and Cityplaza Mall in Hong Kong, but very little is known whether he's still involved in it or not.

This flash series contains examples of: