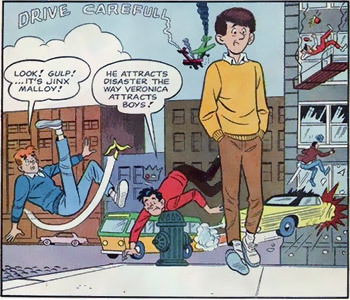 And Veronica is very good at attracting boys.note Also, his jinx range must be at least half a mile, if he made those planes crash. And just what is going on with that building on the right?
I am no one's blessing
I'll just bring you harm
I'm a cursed black cat, I'm an albatross, I'm a mirror broken
Sad to say, I’m your bad luck charm!
— RWBY, "Bad Luck Charm"

A jinx is a living Bad Luck Charm, someone who unintentionally causes calamity everywhere they go. They aren't malicious and they aren't trying to cause harm; they just happen to be very, very unlucky for those around, and bad luck spreads.

The difference between a jinx and someone who is Born Unlucky is the latter's bad luck falls only on himself. While there are many examples were both overlap, the jinx may instead be perfectly lucky himself but causes horrible bad luck for others; sometimes, it's the case that he causes bad luck for others because he's so lucky himself, as a form of Equivalent Exchange. Because of this, a jinx is likely to become a social leper— people avoid him to avoid the bad luck. Jinxes: Even when they win, they lose.

Oddly enough it would seem that in all media, no one has ever thought to consider the potential chaos a jinx could inflict in the world of insurance policies.

Compare Walking Disaster Area, where bad things follow the hero because he's the hero. Doom Magnet is an extreme form. When this is weaponized, it's Winds of Destiny, Change!. May be a Cosmic Plaything, Butt-Monkey, or Chew Toy. Approach with caution. Compare Lethal Klutz who directly causes problems to those around him, generally through clumsiness.

There's an old sea myth that any boat that gets renamed is "cursed", and Boomer is no different. Since he got renamed, he has endured constant bad luck and spread it to others.

There's an old sea myth that any boat that gets renamed is "cursed", and Boomer is no different. Since he got renamed, he has endured constant bad luck and spread it to others.