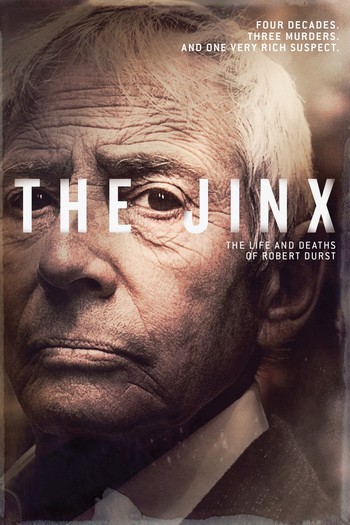 The Jinx: The Life and Deaths of Robert Durst is a 2015 documentary about New York billionaire Robert Durst, who was suspected in the 1982 disappearance of his wife Kathie, as well as the related murder of his friend Susie Berman and the death and dismemberment of Morris Black. Despite compelling evidence suggesting Durst played a role in all three crimes, he managed to get away with with all of them.

Filmmaker Andrew Jarecki, coming off the film All Good Things (a dramatization of Durst and his notoriety) received a phone call from the real Durst, who wanted to commission a documentary about himself. Over twenty hours of footage was shot of interviews with Durst, eventually whittled down to six hour-long episodes.

Upon the premiere, the series received praise for its execution and for the damning evidence Jarecki uncovered against Durst, who had managed to avoid being jailed for years. Then, one day before the finale, Durst was arrested

. He would ultimately be convicted of the Berman killing in 2021 and finally charged with Kathleen's murder shortly after, only to die on January 10, 2022, before he could officially be sentenced or tried for the respective crimes.

In 2019, it came to light that the series' most memorable sequence, a recording in which Durst appears to confess to the murders while talking to himself in a bathroom, was edited to make it sound more incriminating.

Both the book and the film contain examples of: