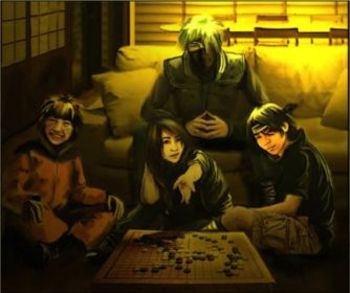 Life as a ninja. It starts with confusion and terror and doesn't get any better from there.
Advertisement:

Shikako Nara is an average girl from the Village Hidden in the Leaves. She has friends, a loving family, but there is something different about her, a secret. And she's been keeping it from birth.

is a Naruto fanfic with a unique approach to the Self-Insert genre of fan-fiction. It attained legendary status among the Self-Insert Fic community by avoiding many of the more common pitfalls associated with the poorer examples via snappy dialogue and a plot that remains focused on the inner struggles of the protagonist as an observer. Among the Naruto fandom, it is often compared favorably to Team 8, another legendary fic.

Overall, a massive Door Stopper guaranteed to keep you reading for hours.

The author has announced an indefinite hiatus.