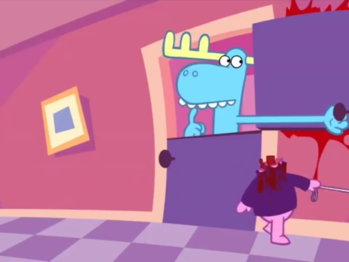 Whenever you see such a character... run. Far away. Where he or she walks, grass won't grow back.

This is the guy who, on getting out of bed in the morning, somehow manages to trigger a set of Disaster Dominoes that ends up blowing up his next-door neighbor's house. After that, he'll swerve to avoid a squirrel on the commute to work, accidentally running a passing Bus Full of Innocents off a cliff. When he gets there, he'll distractedly fire a nail gun straight into the forehead of the resident Butt-Monkey, then, after lunch, flip his Banana Peel onto the floor right in the path of an elderly hemophiliac.

He'll never notice any of this. And while others are in the emergency room, he'll probably come out without so much as a scratch.

And what's that high-pitched screaming coming from under his car on the drive home? Meh. Probably the wind. Oh, did you see that pile of totaled cars a few blocks back? His is still pristine.

The Sadist Show is his natural habitat. He's been known to show up in Crapsack Worlds when they're Played for Laughs. Can lead to Mistaken for Badass when people are impressed with the results of his "work."

This trope is The Klutz taken to its logical - and much darker - conclusion, so it could be called a Deconstructed Character Archetype. But unlike most, it's Played for Laughs far more often than for drama. It's very close to Lethally Stupid, though in that case, the problems are caused by the character's general idiocy, and not always specifically by his clumsiness.

See Mike Nelson, Destroyer of Worlds for the extreme version of this trope. Compare The Jinx who doesn't directly cause mayhem, but somehow manages to induce bad luck in those around him, and The Millstone, a walking liability to his own side. Also compare Walking Techbane when a character is unintentionally destructive to technology. I Just Shot Marvin in the Face is a Sub-Trope. Spanner in the Works, Doom Magnet, and Walking Disaster Area are Sister Tropes. For laughs, may turn out to be Graceful in Their Element.