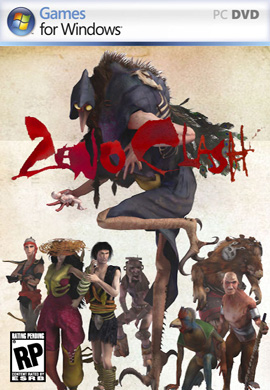 Zeno Clash is a 2009 First-Person Shooter/Beat 'em Up hybrid game made by ACE Team using the Source Engine. It was published by ACE Team themselves on Steam, by Tripwire Interactive for retail, and by Atlus on Xbox Live Arcade. The main emphasis is on melee combat. You can throw complex combos, and the game is essentially a string of battles. The few projectile weapons are slow to reload and somewhat inaccurate and the melee weapons are slow, meaning that most of the emphasis is on fistfights.
Advertisement:

The plot concerns a young man named Ghat who lives in the world of Zenozoik. He is forced to flee his hometown of Halstedom after killing "Father-Mother" a hermaphroditic creature with many children (including Ghat, in fact). He and his Love Interest Deadra flee, fighting their way through the "Corwid of the Free," a group of insane, feral forest dwellers. Ghat recounts the story of how he spent time with them and begins to explain why he killed Mother-Father as they try to put as much distance as possible between them and his enraged siblings.

Eventually they find themselves in a land full of humanoid Living Shadow creatures and meet a mysterious being named Golem, who asks them to return to Halstedom with him after they free him from his prison. On the way back Ghat explains that Father-Mother had a mysterious secret, and recounts how he ended up killing him.

More than a little surreal, Zeno Clash is what you might get after following up a class on surrealist art with a double feature of The Dark Crystal and Labyrinth, followed by an eight hour Double Dragon marathon... while on mescaline. Or as some call it, "Fever Dream: The Game." Oh, and the voice acting's terrible.

A sequel, Zeno Clash 2, was released in 2013 on Steam, XBLA and PSN. Zeno Clash II continues the story of the first game, and introduce a Wide-Open Sandbox, RPG Elements and Co-Op Multiplayer to the mix.