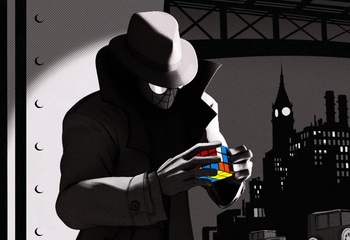 "I don't understand it... but I will."
The Rubik's Cube is a fascinating toy. Since its invention, it's spawned clubs, speedrunning competitions, and many derivatives. However, it's not known for being an intuitive toy, and in a lot of cases, those encountering it for the first time may be taken aback by its design.
Advertisement:

Occasionally, a character will discover the cube and fiddle around with it for a bit, perplexed by the mysteries of its multicolored faces. This usually occurs in settings that take place on alien worlds or After the End, where novelty is less important than survival or the person who finds it is of a different mindset. Sometimes this produces a childlike sense of wonder, while other times it results in frustration and obsession. Discovering the intended "use" doesn't always correct things — it may cause the individual to become even more determined to solve it, and then finding out nothing happens could be... upsetting.

Despite the name, for the trope to count, the character cannot simply be finding or playing with a puzzle cube toy, rather it's for seeing one for the first time and not understanding it. If the Rubik's cube is used to show how smart the character solving it is, then it's Rubik's Cube: International Genius Symbol.

Compare with Mundane Object Amazement (which is this trope, but applied to mundane objects). Contrast with Unusually Uninteresting Sight.