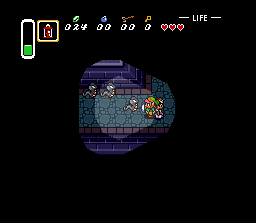 (For the proper stroboscopic effect, open and close your eyes repeatedly as you read this.)

Blackout Basement is a level in a video game where the lighting is inconsistent. This can take a few different forms:

The darkness may apply only to certain layers, so that the player and (possibly) enemies remain visible at all times, but immobile hazards like Spikes of Doom are as invisible in the dark as the other elements of the background layer. Or the dark itself can be a hazard.

It's almost entirely black... until Mario turns the lights on.

It's almost entirely black... until Mario turns the lights on.