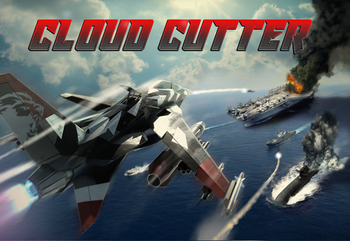 CloudCutter is a 2021 Shoot 'Em Up action game and a Retraux-style Vertical Scrolling Shooter in the vein of classics like Raiden and Aero Fighters, but with photorealistic, lifelike graphics.

The eponymous CloudCutter is a state-of-the-art, highly advanced jet fighter made with the best technology the air force has to offer, and you are in the cockpit as you pilot the CloudCutter through various levels to take on enemy forces.

The CloudCutter can cut through clouds and enemies alike.