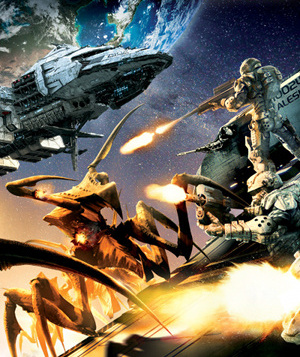 Making the galaxy safe for humanity. One planet at a time.
Advertisement:

The Protagonist in this genre is normally part of the chain of command (or becomes part of it in progress), while an ensemble cast is The Squad. The story is usually set against the backdrop of a large-scale (space) war but war is optional. The Science Fiction part mostly manifests in futuristic weaponry and vehicles (first of all, Cool Starships), while the organization structure is mostly based upon contemporary US or Commonwealth military. It should come as no surprise that a high percentage of MSF writers are military veterans.

Often, the writers would cheat a little by having a Mildly Military organization instead of realistic military for the sake of good story. One particular subgenre of MSF in Video Games is A Space Marine Is You. Another that's especially particular (but by no means exclusive) to anime is the Real Robot Genre.

Tropes commonly used in MSF (in addition to most Military and Warfare Tropes):