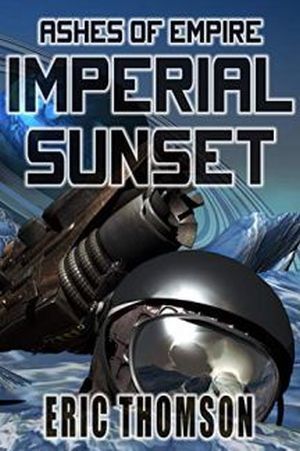 Ashes of Empire is a Military Science Fiction series by Eric Thomson, set in the same universe as his Decker's War and Siobhan Dunmoore novels but far in their future.

Humanity's empire has lasted over a thousand years, but four generations ago Senator Stichus Ruggero bypassed the constitution to not only name himself Emperor Stichus, but make the throne hereditary in the Ruggero family. Now, under Empress Dendera, the empire is being torn apart by civil war.

Captain Jonas Morane, a naval officer and amateur historian, realizes the decay has gone too far for anyone to stop. When most of his task force (and all his commanding officers) are wiped out by a rebel ambush, he takes the opportunity to flee through the wormhole network. Morane hopes that if he can establish a "knowledge vault" and keep it secure, he can shorten the inevitable period of barbarism that comes whenever an empire falls.

Novels in the series are:

(If you're looking for the David Weber trilogy with a similar name, it's here.)

Tropes In The Knowledge Vault: