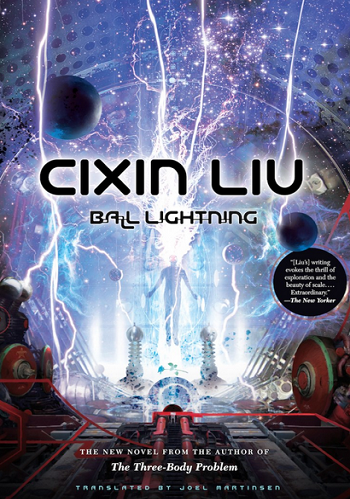 Ball Lightning is a 2004 Chinese science-fiction novel by Liu Cixin (best known for The Three-Body Problem), possibly the single most popular sci-fi novel in China. It was first published in English in 2018, with a translation by Joel Martensen of danwei.org.
Advertisement:

The story is centered around Dr. Chen and Major Lin Yun's pursuit and research of the eponymous anomaly, its weaponization and a war that... got worse after it ended. As shown by its sequel, the Earth's Past trilogy.

Dr. Chen, who witnesses both his parents get disintegrated by ball lightning, devotes his entire life to researching the poorly understood phenomenon. His quest takes him to a national defense research institute where government scientists are seeking to use ball lightning as a new-concept weapon. He becomes disgusted with the thought of his pure scientific research being used for killing, but every time he tries to escape, his obsession draws him back in.