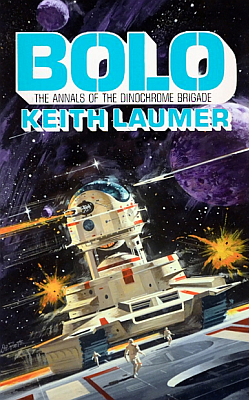 "Bolos might fail. They might die and be destroyed. But they did not surrender, and they never — ever — quit."
Advertisement:

A series of stories, originally by Keith Laumer, that were later expanded into a Shared Universe by other authors. They detail the exploits of the Bolo, autonomous AI tanks that are supposed to have evolved from the standard main battle tank of the 20th century.

These aren't your normal tanks. For one, their designers decided that bigger was better, and since the only thing that could really take down a Bolo was another Bolo, they just kept building the Bolos bigger and bigger, to the point where even the stealth tanks mass 1,500 tons.note For comparison purposes, modern MBTs mass around 60 to 70 tons, give or take a bit. Or in some novels the Mark XXXIII weighs 32,000 tons. note  Which is pretty close to the weight of the USS New Mexico, a World War 2 era battleship.

For another, they are keenly intelligent, often with surprisingly human personalities. Quite a few of the stories focus on the relationships between the Bolos and their human commanders, because no matter how well they get on, the mountain of armour-clad metal bristling with weaponry is programmed to/wants to (the line gets murky at times) defend the squishy humans at all costs. For while there have been Bolos who were historians, knights, poets, spies and gardeners, they are warriors first and foremost, born to fight alongside their human comrades.

Not to be confused with someone the police wants to find, the type of neck-tie, "cake" in Portuguese, or the traditional weapon of Argentinian gauchos (or of Filipino warriors).

The proud history of the Dinochrome Brigade provides examples of these tropes:

"For the honor of the regiment."