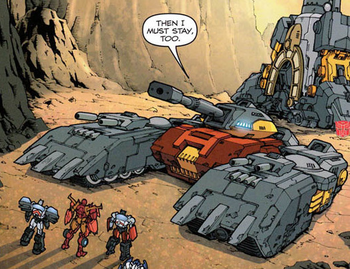 What happens when you mix Tank Goodness with Artificial Intelligence? An awesome soldier with firepower, mobility, and armor, that's what. Occupying the hostile grey land between Attack Drone and Androids (or Gynoids), they tend to fight hard for truth, justice, and the meat-bag way. They are often portrayed as protagonists, but they are just as likely to be enemies of humanity in a Robot War.

If one of these existed, it could have several advantages over a manned tank. Space for crew members could be eliminated to make the tank smaller in volume, reducing the overall weight and target profile without sacrificing armor protection. It would use an auto loader, giving it a high rate of fire. The AI could process information coming from multiple optics and sensors at once, integrate intel coming from scout drones or mission control, and eliminate delays or misunderstandings caused by crew members having to communicate with each other. It would be less vulnerable to chemical, biological, and radiation hazards, not to mention requiring no life support if it were deployed on a planet with extreme temperatures or no breathable atmosphere. Depending on how human-like its mind was, it could be immune to fear, pain, psychological trauma, boredom, fatigue, or the need to sleep. Actually, all of this sounds pretty scary and you could imagine people’s reluctance to give that amount of power to a machine.

For additional flavor some such tanks are Haunted Technology possessed by demon, ghosts, or sprits instead of sprites, desktops, or gears. Or in some cases, a person is conjoined with the tank as the power source or CPU.