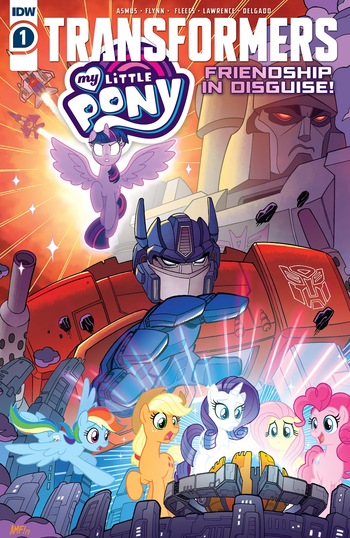 Friendship's about to Roll Out!
"Finally, a series for mature readers."
— TFWiki.net's comment on the cover art of the first issue

.note Note that they're speaking from the perspective of Transformers fans.
Advertisement:

Queen Chrysalis has decided that since she and her army are outnumbered by Equestria's heroes, she'll call in help from changelings in other dimensions to even the odds. However, her summoning spell accidentally connects to a Cybertronian Space Bridge, bringing dozens of Autobots and Decepticons into Equestria. Robots from both sides of the conflict end up scattered across the land, and Spike finds himself stranded on Cybertron as well. Twilight and her friends quickly get on good terms with the Autobots and fend off attacks by Megatron's troops, leading up to a final confrontation in which Megatron and Chrysalis make their bid to take over Equestria.

A sequel, subtitled "The Magic of Cybertron", was released in April 2021. This time, the ponies are brought to Cybertron as Megatron seeks to harness their power for his own ends. However, things go sideways when Twilight accidentally triggers the revival of King Sombra, who proceeds to brainwash numerous inhabitants of both Cybertron and Equestria, including Megatron and half of the Mane Six, to serve as his minions and aid him in conquering Cybertron. Thus, everyone else is forced to team up to put a stop to Sombra's ambitions.

My Little Pony/Transformers: Friendship in Disguise provides examples of: