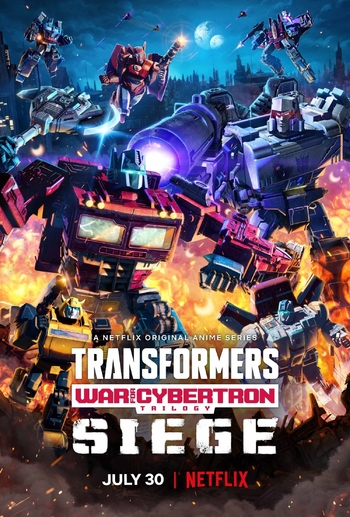 It's a life worth fighting for.
Advertisement:

Transformers: War for Cybertron Trilogy is a 2020 Netflix CGI-animated series showrun by F.J. Santo (Titans Return, Power of the Primes), produced by Rooster Teeth, and animated by Polygon Pictures, loosely based on the Transformers toyline subseries of the same name (as opposed to the Video Game). Three seasons, Siege, Earthrise, and Kingdom, are now available on Netflix.

The three arcs to this trilogy are Siege, Earthrise, and Kingdom.

The first chapter, Siege, is set during the final moments of the Cybertronian war, where both sides are locked in a stalemate on a ruined Cybertron. When Megatron plans to find the AllSpark to forcibly convert every Autobot into a Decepticon to end the war, Optimus Prime and his crew of remaining Autobots must retrieve the AllSpark before Megatron does, and take it off Cybertron, which may have dire consequences for the planet.

The second chapter, Earthrise, has two divided factions of Autobots attempting to resist Decepticon takeover with one faction led by Elita-1 on Cybertron and another faction led by Optimus Prime on the Ark searching for the AllSpark to bring it back to Cybertron. Megatron pursues his war on both Autobot teams while Optimus and Megatron's squads are confronted by mercenaries allied with a mysterious, five-faced contractor.

The final chapter, Kingdom, features both Autobots and Decepticons meeting their descendants, the Maximals and the Predacons and join forces with them for their fight for the AllSpark. This culminates into a showdown with two faces Optimus and Megatron previously encountered, both threatening to destroy them all, forcing all factions to unite to counter the threat.