Web Animation / The Transformers: Power of the Primes 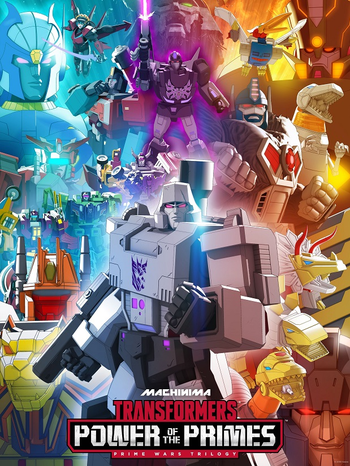 "Oh, Optimus...if you could see me now..."
Advertisement:

The third and final installment of the Prime Wars Trilogy, directly following the conclusion of The Transformers: Titans Return.

Following the death of Optimus Prime, Megatronus claims the Enigma of Combination and the Matrix of Leadership for his own. Now he seeks the Requiem Blaster, intent on harnessing the power of all three artifacts to create a dangerous doomsday weapon. As infighting breaks out between Transformers in fear of the coming apocalypse, a small team led by Megatron must band together to reach the Requiem Blaster first and fight back before Megatronus can wipe out their species forever, all the while contending with his acolytes Overlord and Rodimus Cron. Secrets from Cybertron's past will be revealed, and a new Prime shall be named as the Transformers make their last stand.