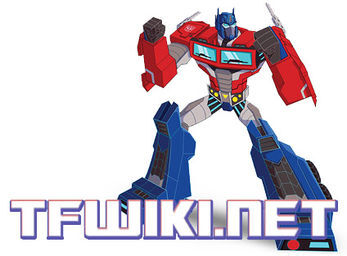 The site's logo, featuring Cyberverse Optimus Prime.
I think the fans behind [TFWiki.net] recognize just how irreconcilable most Transformers continuity is, and try not to sweat inconsistencies or incongruities and just roll with it. That, I can appreciate. It's got the perfect mix of retentive detail and irreverence.
—Pablo Hidalgo, "Turns Out, I'm a Wikipedian

" note The wiki used to be called "Teletraan-1" (as the source of this quote calls it) after the computer in The Transformers, until they had to move from Wikia to their own private server. Since Wikia refused to delete the old wiki, the new one adopted a different name to make it easier for people to notice the move.
Advertisement:

is the Transformers franchise's most prominent fan wiki. Meticulously referenced and the prime source for information about the franchise, the contributors have been committed enough to pool money to buy obscure toys and media for research purposes. However, unlike most wikis, its style is rather informal and chock full of Lampshade Hanging, Running Gags, Mythology Gags, Shout-Outs, and Memetic Mutation. This of course leads to great synergy with This Very Wiki, being the source of page quotes, or even trope names, and lending itself to cross promotion

for the non-Transformers parts of the Hasbro Comic Universe, the GoBots Wiki

for the tangentially-related Challenge of the GoBots, and Transformers: The Basics

, a series of video guides to the Transformers franchise produced by prominent wiki editor Chris McFeely.

Not to be confused with the Team Fortress Wiki

, the other TF wiki, which formerly had the domain "TF2Wiki.net".

This wiki provides examples of: