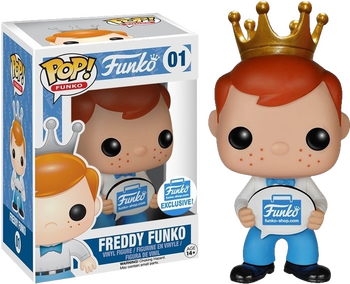 Funko Pops (stylized as Funko Pop!) are a line of vinyl figures from Funko. The pops are well known for their signature Black Bead Eyes and Super-Deformed appearance. They were first introduced in 2010, and since then thousands of Pops have been released.

At E3 2018, it was announced that the toyline would receive its first mobile game tie-in with Gears Pop!, a spin-off of the Gears of War franchise. In September 2020, Funko Pop! Blitz, a Match-Three Game, was released.

A film based on the figures is in the works as well, being developed at Warner Bros. A story is reportedly being written by Teddy Newton (Day & Night) and Mark Dindal (The Emperor's New Groove, Cats Don't Dance).

For a tentative list of the works and people who have been given the Pop! treatment, see here.