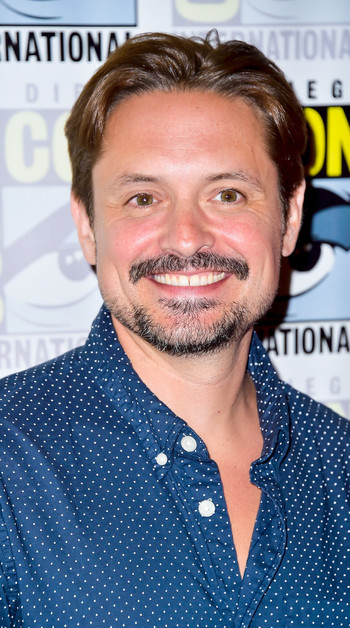 "Lose one friend, lose all friends, lose yourself."
Advertisement:

William Alan Friedle (born August 11, 1976 in Hartford, Connecticut) is perhaps best known for his comedic roles, most notably the underachieving elder brother Eric Matthews, on the long-running TV sitcom Boy Meets World from 1993 to 2000. More recently, he has voiced a number of animated characters such as Terry McGinnis, the titular character of Batman Beyond, Ron Stoppable of Kim Possible, The Blue Beetle (Jaime Reyes) in Batman: The Brave and the Bold, Nightwing in Batman Unlimited: Animal Instincts, Lion-O in ThunderCats (2011), Deadpool in Ultimate Spider-Man (2012), Doyle in The Secret Saturdays, and Star Lord in Guardians of the Galaxy (2015). He has also voiced prominent video game characters such as Gideon Wyeth in Advent Rising and Jaster Rogue in Rogue Galaxy.

Friedle is best friends with actor Jason Marsden and was best man at Marsden's wedding in October 2004. The two have also worked together in numerous productions such as: Boy Meets World, Kim Possible, Batman Beyond, Batman: The Brave and the Bold and Justice League Unlimited.

He also voiced Deadpool in Ultimate Spider-Man (2012), Bumblebee in Transformers: Prime, and Star-Lord in Guardians of the Galaxy (2015).

After years of holding out, Friedle joined

Twitter in October 2014. His feed is definitely worth following.

After not appearing in a live-action role for ten years due to anxiety issues brought on by camera shyness (as well as conflicts with his impressive vocal acting resume), Friedle reprised his role as Eric Matthews in an episode of Girl Meets World.