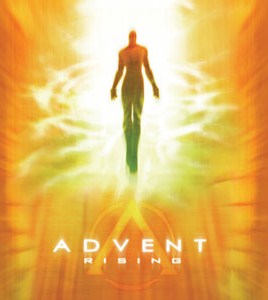 Advent Rising is a third-person action-adventure game for Xbox that was released in May of 2005 (with a PC version being released a few months later). You play as Gideon Wyeth (Will Friedle), seeking to defend humanity from an alien race known as "The Seekers". To help you in this quest are the friendly Aurelians, your brother Ethan, your fiancée Olivia (Vanessa Marshall), and the fact that humans are apparently demigods with a vast number of powers.

Presently, the game is available on Steam and GOG.com for PC, as well as on Xbox through their backwards-compatibility program. The game also received a five-issue spin-off comic book series, which is available digitally as DLC on Steam. The PC version is also available on - for whatever reason - the DVD release of the Uwe Boll film Seed.