I Want You to Meet an Old Friend of Mine 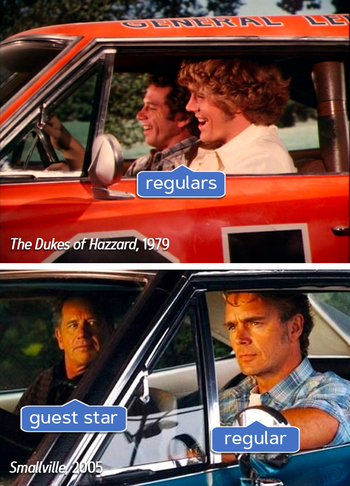 Stealth cameo: the Dodge Charger.
"Don't I know you?"
— Lord Vultare to Baydool, Quest of the Delta Knights
Advertisement:

A guest appearance by someone with a prior professional relationship with one of the cast members of the show, such as Rhea Perlman appearing on Becker, Christopher Lloyd appearing on Spin City, or Helen Hunt appearing on The Simpsons. More often than not the guest actor will be playing an Old Friend of the relevant character, whom they haven't seen in years.

Subtrope of Casting Gag. Liable to be a Large Ham. Expect numerous Actor Allusions. Compare Real-Life Relative. Not to be confused with Old Friend, Remember the New Guy? or Beleaguered Childhood Friend, but can overlap with any of them. Compare Relationship Voice Actor.