Film / The Senator Was Indiscreet 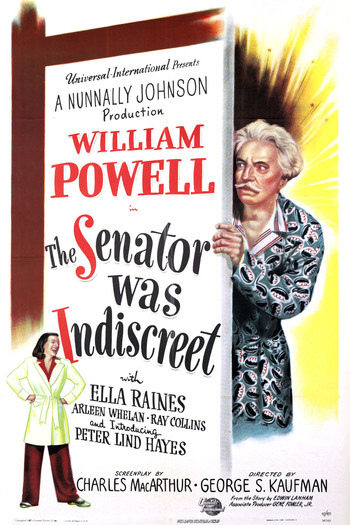 The Senator Was Indiscreet (also known as Mr. Ashton Was Indiscreet) is a 1947 comedy directed by George S. Kaufman. It is a farce about politics.

U.S. Senator Melvin G. Ashton (William Powell) is a bumbling goof who, in spite of his brainless incompetence, wants to be President. Publicist Lew Gibson (Peter Lind Hayes) is well aware of his boss's incompetence but is pushing his boss's campaign to further his own ambition, much to the disgust of his girlfriend Poppy McNaughton (Ella Raines), a newspaper columnist. His own party, represented by boss Fred Houlihan (Ray Collins), doesn't want Ashton to run.

It so happens, however, that Ashton has kept a diary throughout his 35 years in politics, and said diary is chock full of incriminating material. Faced with this threat, Houlihan does an about-face and supports Ashton's campaign, and Ashton starts to climb in the polls. Poppy breaks up with Lew. Ashton returns to New York to make a big campaign speech at Madison Square Garden. However, after the speech he realizes that his diary — his extremely sensitive, incriminating diary — has been stolen. Panic breaks out as not just Ashton but all his party cronies realize they face disgrace and prison.

The only film ever directed by Kaufman, who's far better known for his hugely successful career as a playwright. This film, a silly comedy about politics, is very similar to Kaufman's Pulitzer Prize-winning theatrical comedy Of Thee I Sing. The screenplay was written by Charles MacArthur, best known for co-writing the much-filmed stage comedy The Front Page.

Look for Iron Eyes Cody, the Crying Indian himself, as one of the Native Americans meeting Ashton in the opening scene.