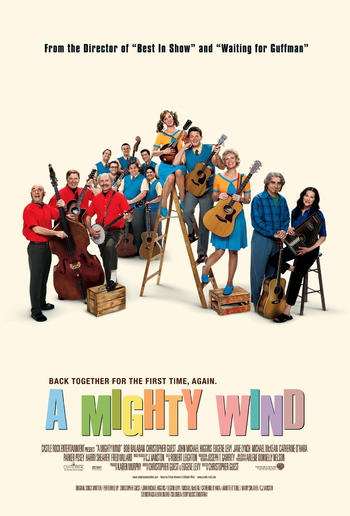 Back together for the first time, again.
"Oh, a mighty wind's a-blowin', it's kickin' up the sand...
It's blowin' out a message to every woman, child and man..."
Advertisement:

A Mighty Wind is a 2003 mockumentary film about a reunion of Folk Music singers, directed by Christopher Guest. The movie's comedy is comparable to that of Guest's other films, This is Spın̈al Tap, Best in Show, and Waiting for Guffman, as well as having mostly the same cast as those films, including Guest, Eugene Levy, Catherine O'Hara, Michael McKean, Harry Shearer, John Michael Higgins, Jane Lynch, Parker Posey, and Fred Willard.

The plot is started by the death of Irving Steinbloom, a folk music producer, whose children plan a reunion concert with several of the bands he worked with to honor his memory. However, there are several things that make this difficult, such as the fact that once-married duo Mitch & Mickey (Levy, O'Hara) haven't spoken for decades since their messy breakup, and Mitch's resulting Creator Breakdown. Not to mention emerging tensions between the members of The Folksmen trio (Guest, McKean, Shearer), and the fact that the New Main Street Singers are an ersatz revival of the original group managed by former sitcom star Mike LaFontaine (Willard).

Presented as an Affectionate Parody of The '60s folk revival, the movie received largely positive reviews, with particular praise going towards the performances and the music within.

"A Kiss at the End of the Rainbow" earned itself an Academy Award nomination, making it somewhat of a Defictionalization.