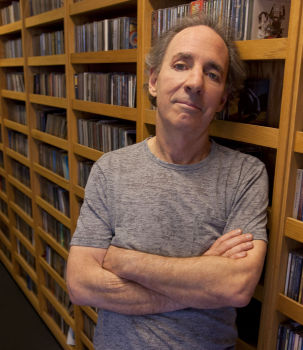 "My job is to take what I think is funny and to make other people think it's funny, too."
Advertisement:

Harry Julius Shearer (born December 23, 1943 in Los Angeles, California) is an American actor and Voice Actor famous for starring as Derek Smalls in This is Spın̈al Tap, as well as his voicework on The Simpsons, where he played many characters including squeaky-clean religious neighbor Ned Flanders, cynical preacher Reverend Timothy Lovejoy, school principal and Shell-Shocked Veteran who still lives with — and is being controlled by — his mother, Seymour Skinnernote though the infamous "Principal and the Pauper" episode reveals that the man who calls himself Seymour Skinner is really a street punk named Armin Tamzarian, who took over for a man named Seymour Skinner after he was M.I.A during the Vietnam War, evil nuclear plant owner Charles Montgomery Burns and his increasingly Transparent Closet, sycophantic assistant Waylon Smithersnote leading to a very Ho Yay-tastic case of Screw Yourself and Talking to Himself, Bill Cosby Expy and the town's only competent doctor Dr. Julius Hibbert, sarcastic, often unprofessional news anchor Kent Brockman, Homer's friend and plant coworker Lenford "Lenny" Leonard, Grandpa Simpson's elderly vitriolic best friend Jasper Beardley, stoner bus driver Otto Mann, and Arnold Schwarzenegger Expy Rainier Wolfcastlenote He also provided the voice for the "actual" Schwarzenegger, who had been elected President, in The Simpsons Movie.

He has also hosted the satirical NPR series Le Show since 1983.

Shearer entered show business as a child actor, appearing in the film The Robe and on such TV programs as The Jack Benny Program and Alfred Hitchcock Presents as well as the pilot of Leave It to Beaver. After attending college at UCLA and grad school at Harvard, he briefly worked as a staffer in the California state legislature and a high school English teacher before appearing with the satirical radio comedy troupe The Credibility Gap in the early '70s. Later in the decade worked as a writer for the Fernwood Tonight retool America 2-Night and helped pen the screenplay for Albert Brooks' film Real Life.

Shearer was a writer and cast member for Saturday Night Live during its fifth (1979–80) season, then returned during season ten (1984–85), Dick Ebersol's final season as show runner before Lorne Michaels's return; Shearer can thus be regarded as the Grover Cleveland of SNL note in that he appeared in two non-consecutive seasons. Shearer's reason for leaving SNL during its tenth season (mid-season): Creative Differences (in his words, "I was creative, they were different.") Most of the celebrity impressions he did on SNL were transferred to The Simpsons: his Vin Scully impression was heard on "Krusty Gets Kancelled" and sounds very similar to Kent Brockman, his Ronald Reagan impression and mannerisms are the basis for Mr. Burns, and his Rod Serling impression was used on the "Treehouse of Horror" special featuring the story of Bart using his God-like powers to make everyone in town bow to his whims, which parodied the The Twilight Zone (1959) episode "It's a Good Life".

In May 2015, it was announced that he would be leaving

The Simpsons as of its twenty-seventh season. In July of that year, however, the show's producers announced that they'd struck a deal with Shearer and he would remain in the cast.