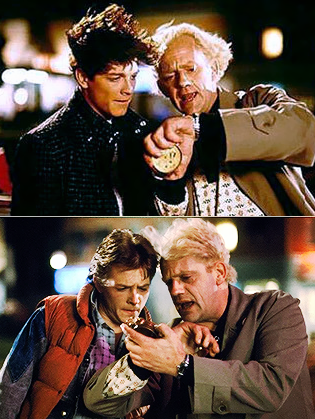 "Now pay attention, Eric Stoltz. If my calculations are correct, you will be replaced by Michael J. Fox in exactly... seven minutes and twenty-two seconds, precisely!"
Advertisement:

Casting can be a tricky thing. You don't always get it right at first, and it so happens you might replace an actor after having them already film a substantial amount of the film. That means for all important scenes involving that actor you have to reshoot it with your new performer. In some cases, quick shots of the original actor may find their way into the final cut, though you'd probably only notice this if you paused on those shots. It is, of course, much easier to pull off the Other Marty in animation and voice-only roles.

Named for one of the more famous examples. Originally, Eric Stoltz was cast as Marty McFly in Back to the Future. However, after a good portion of the movie was filmed, the filmmakers, Bob Gale and Robert Zemeckis, decided that Stoltz's performance was too dark, and he was replaced by Michael J. Fox. Gale and Zemeckis had actually wanted Fox from the start, but scheduling conflicts due to his work on Family Ties prevented him from accepting the role. In the final cut of the movie, Stoltz can be seen driving the DeLorean in wide shots of the car chase at the mall, and it's his fist punching Biff Tannen in the diner.

According to the 2015 documentary Back in Time, in a lot of the shots that don't have Marty onscreen, but the other actors are reacting to him, it's Stoltz who's actually in these scenes.

In a more general business sense, the use of Stunt Doubles and set doubles means that often we are not seeing the actual actor in as many scenes as we may believe. In animation, character models may be changed and updated as work progresses and completed footage may end with glimpses of that original character. Likewise, while replacing voice actors for an animated work is common, sometimes these actors are also made to go back to re-record and replace the voice of older episodes of a show so that when the older episode is re-run, the new actor's voice is heard.

See also What Could Have Been, The Pete Best, Deleted Role, and Fake Shemp.