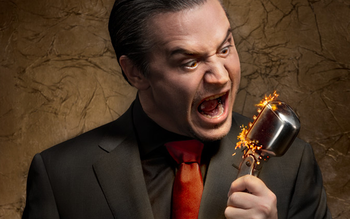 Michael Allan Patton (born January 27, 1968) is an American singer, producer, composer, voice actor and record label owner, affiliated with a number of groups but best known as the lead vocalist of Faith No More.

He's been a notable and influential artist over the years for his vocal proficiency (possessing the single widest known vocal range of any singer in popular music at six octaves), diverse influences and techniques, versatility in outputs, eccentric public image and outspoken contempt for the music industry.

Patton started out as frontman for his high school band Mr. Bungle before his joining FNM catapulted him to fame. Since then, he has become insanely prolific; apart from the aforementioned large number of groups he's been a part of, he collaborated with a huge number of other artists (such as The Dillinger Escape Plan, Serj Tankian, Massive Attack, The Qemists and Björk of all people).

In 2007, he started working on various projects in voice acting, mainly as crazy-ass demented characters, such as the eponymous Darkness in The Darkness, the Anger Sphere in Portal, zombies in Left 4 Dead and creatures in I Am Legend. From this, you probably think that he exclusively does insane gabbling in weird voices, and you'd be right... if he hadn't also voiced the main character in Bionic Commando. He also provides the voice of the Lemony Narrator of Bunraku.