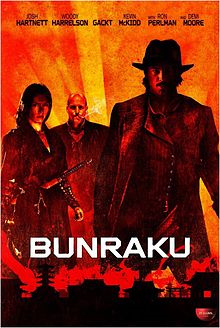 Bunraku is a bizarre 2010 film, described as a "computer-animated live-action fantasy" that revolves around a No Name Given stock character who goes around fighting crime and taking names. Directed by Guy Moshe, the title of the film is based on a 400-year-old form of Japanese puppet theater.

The plot is as follows: In a post-apocalyptic future, a mysterious drifter (Josh Hartnett) and the ardent young samurai Yoshi (Gackt) both arrive in a town terrorized by outrageous and virulent criminals. Each is obsessed with his separate mission and, guided by the wisdom of The Bartender (Woody Harrelson) at the Horseless Horseman Saloon, the two eventually join forces to bring down the corrupt and contemptuous reign of Nicola (Ron Perlman), the awesomely evil "woodcutter", and his mistress Alexandra (Demi Moore), a Femme Fatale with a secret past. Heroes triumph here only because the force of their will transforms and transcends both space and time.