Film / Bunny and the Bull 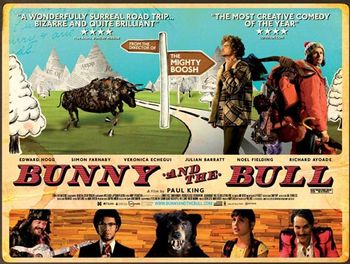 Bunny and the Bull is a 2010 film, notable for being written and directed by Paul King, who also directs The Mighty Boosh. It stars Edward Hogg and Simon Farnaby, with Richard Ayodade as a tour guide, Verónica Echegui as the love interest, Eloisa, a superstitious Spanish Waitress, and has Noel Fielding and Julian Barratt in cameos.

The plot is somewhat non-linear, however a brief rundown goes like this: Stephen, (Edward Hogg) has not left his apartment for a year, and survives on television and frozen vegetarian meals. He is strongly implied to have both Obsessive Compulsive disorder and (apparently) strangers simply come and go into his house whenever they please. One day, his best friend, Bunny (Simon Farnaby) , messes up his perfectly ordered house and forces him to recall the memories of a road trip taken the year before. Bunny had taken Stephen on a journey in an attempt to get him laid; and things seem to be going well when Stephen meets Eloisa and falls hopelessly in love with her, but before Stephen can act on his feelings, Bunny seduces Eloisa.

From here, the film takes a far sadder and more grim twist that the trailers would have you think. The film is not as sweet and whimsical as advertising suggested; there's a few really, really heartbreaking scenes, as well as some laugh out loud moments, and, naturally, the film is BRIMMING with Homoerotic Subtext.

This Film contains Examples of: