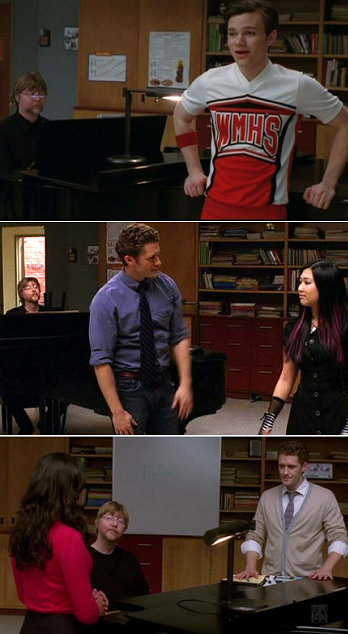 Over the piano was printed a notice: "Please do not shoot the pianist. He is doing his best."
— Oscar Wilde, Personal Impressions of America
Advertisement:

The Piano Player could very well be a large reel of paper, making the piano effectively a large music box.

When an actual person is used, they don't necessarily have more personality. This is a shame, as the ragtime music featured in most western saloons used heavy repetitions of notes that could very well be Level Grinding your arms into a level of badass.

Expect a competent professional musician in white shirtsleeves and slicked hair, often brought in from "out East" for the sole purpose of being able to play the latest songs as well as any request. (That doesn't stop them from playing almost the exact same tune in every bar.)

The Piano Player becomes an important device because although he is able to play for hours without a break, the mere mention of "Bad Bart" or any local Big Bad causes him to slam the keys once before the foreboding silence. Sometimes they comedically continue playing stoically while the bar behind them breaks out in a Bar Brawl, though they might also help out by playing more intense music while there's a fight. If one really wants to be nasty to the player, one could slam the wooden keyboard lid on their fingers.

However, their character is tied up in the piano and they rarely have any lines, with all questions about the bar being directed to The Bartender.

The Piano Player is a convenient justification for Source Music, which can lead to Suspiciously Apropos Music (for example a sudden shift to a more ominous tune when the bad guy enters) or a Left the Background Music On gag.