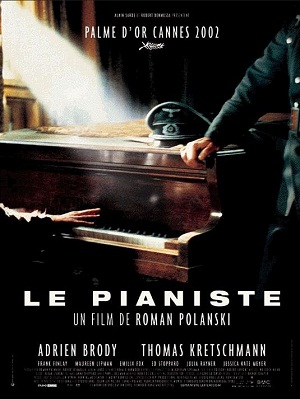 Władysław Szpilman: I don't know how to thank you.
Captain Wilm Hosenfeld: Thank God, not me. He wants us to survive. Well, that's what we have to believe.
Advertisement:

The Pianist is a 2002 film directed by Roman Polański, starring Adrien Brody and Thomas Kretschmann.

It was adapted from the memoirs of Władysław Szpilman. Szpilman (Adrien Brody) is an accomplished concert pianist with a thriving career in Warsaw, Poland in 1939. He still lives with his family, consisting of his mother and father, his brother Henryk, and his sisters Halina and Regina. They are Jewish—assimilated, Polish-speaking Jews, as oppposed to the Yiddish-speaking Jews that constitute most of Polish Jewry.

On September 1, 1939, World War II begins with the German attack on Poland. Within a month, the badly outnumbered and outgunned Poles are defeated by the Nazis. Life is worse for everyone but it is particularly terrible for the Jews of Poland, as the Nazis immediately institute a raft of anti-Jewish laws and begin mercilessly persecuting them. Things get worse and worse, as the Jews of Warsaw are crammed into a tiny ghetto and cut off from the rest of the world, and used as slave labor. They begin to starve. Finally the day comes when the Szpilmans are rounded up and put on cattle cars bound for the death camp of Treblinka. However, Szpilman is taken out of the line for the train at the last second by a Jewish ghetto policeman. Three more years of struggle lie ahead for Szpilman as he hides in Warsaw, struggling to survive, helped by his pre-war Gentile friend Dorota (Emilia Fox), and, later, by German officer Wilm Hosenfeld (Kretschmann).

Not to be confused with The Piano Teacher, which has a similar title in French (La Pianiste).