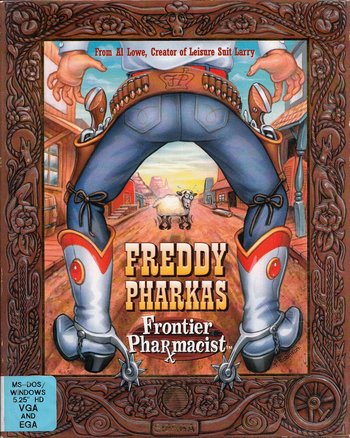 Freddy Pharkas: Frontier Pharmacist is a 90's Point-and-Click adventure game. Considered one of Sierra's best, and possibly even one of the best adventure games of the 2D VGA era. Strangely, despite being very successful, it did not receive a sequel.

Set in the Wild West, this game follows the exploits of a gunslinger named Frederick "Freddy" Pharkas (Hungarian roots unexplored). Freddy, having been proclaimed the best gunslinger in the mid-west, meets his match at the hands of the ominously-named outlaw Kenny the Kid. Kenny shoots Freddy's ear off in a duel, prompting Freddy to forsake gunslinging and vow never to pick up a pistol again. Instead, Freddy picks up his other hobby: pharmacology. He moves to the town of Coarsegold, CA (a few miles away from Sierra's headquarters in Oakhurst), and never reveals his past to any of the townsfolk.

Years later, trouble comes to Coarsegold when the local Sheriff starts shutting down businesses left and right, declaring that their buildings are "fire-hazards" (which is kind of understandable, since the whole town is built out of wood). When Freddy tries to investigate a little into the matter, his pharmacy is nearly put to the torch one night. Realizing that something is afoot, Freddy eventually concedes to his fate, returning to his old gunslinging ways in order to save his beloved town.

The game includes adult themes and plenty of sultry, witty humor by Josh Mandel and Al Lowe (of Leisure Suit Larry fame). It also contains some notoriously difficult arcade sequences. The game comes with an extensive manual on common diseases and pharmacology, written in 19th century style (thus containing, obviously, many hilarious misconceptions about medical practice as a whole). There are several points in the game where Freddy must utilize a well-equipped pharmaceutical laboratory to concoct pills and potions from a large variety of chemicals.