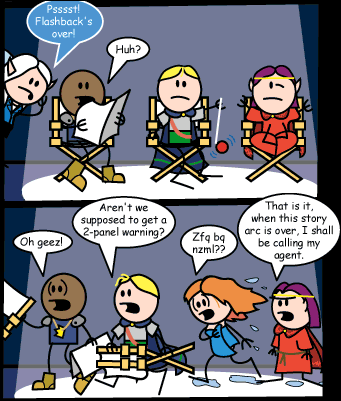 Haruko: Those slow motion scenes are really tough, huh?
Mamimi: Yeah, you have to hold your breath until they cut.
Haruko: You can get cramps from that, you know?
Naota: What? I thought it was a special effect! You're doing the slow motion?
— FLCL
Advertisement:

An animated episode is in full swing. The action suddenly stops, the characters step out of character, and address an unseen figure. The view pulls back to reveal the action is taking place on an animated TV soundstage. Usually punctuated by a heated exchange between the animated director and the character.

This is a specific type of fourth wall joke.

Many times, the "actors" who play the characters are very different from the characters themselves. Often, the dumb, inarticulate comedy relief will turn out to be a posh Shakespearean ac-tor. A large, imposing character may take off his head, revealing himself to be a normal-looking guy wearing a costume. The Big Bad may turn out to be a total sweetheart when not in character. If not, the character's "actor" will be exactly the same or very similar to their on screen portrayal, if perhaps with a little more real-world common sense coming from not being a part of the action.

Many times, the character's name will stay the same, but occasionally the crew will call them by the voice-actor's name.

Also used as a method of Lampshade Hanging, as the character will often complain about some trite or hackneyed element of the scene, and refuse to proceed. There's also the popular gag of having them mess up their lines or goof off, though obviously these Animated Outtakes took just as much work to write, voice, draw and animate as the rest of the show.

This can be a throw-away gag, or it can be the plot of an entire episode.

If the animated characters are interacting with live action humans / people, it's the Roger Rabbit Effect.

If taken to a whole dimension, where characters in a writer's portfolio are reused across whole works (sometimes with different roles) like how a "real" actor/actress would, it becomes a Reused Character Design.