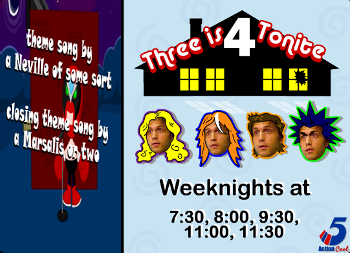 Coming up later on Three is 4 Tonite: join Mandy, Brandy, Andy, and Scurge, as they learn how to give a care.
"Now our credits can't have distracting words or visuals in them so they can be squeezed and babbled over. But we miss old end credits and here's why. Proper end credits provide a mental breathing space, bookending each show and giving you time to let your mental food go down. It's a bit like the moment you finish a novel. It's nice to gaze wistfully out of the window for a few moments and reflect. But how much shittier would that be if the minute you finished, someone tried to get you to read another book and another book!?"
— Charlie Brooker, a quote from Screenwipe
Advertisement:

When a TV station squeezes the credits of a show or movie into a tiny fraction of the screen and shows ads in the rest. If you are using a DVR and that has a "zoom" feature, you might be able to pick out things like who shot the thing (!), and who played "Pretty Older Woman".

Very popular in the late 1990s and most of the 2000s, it seems to have lessened recently with new programs, due to the fact that modern end-credits have been reduced to basically a Vanity Plate, perhaps in response to this trend. Channels which mostly show repeats of older shows, however, have this in spades. It's vaguely rude to the creators of the show whose names are obscured, though in the Internet age if anyone is interested in finding out who the Second Assistant Director was or who played "Pretty Older Women", the feeling is they can just look it up on IMDb.

The ad shown on the rest of the screen is always a promo for the station or a particular program on the station, often with innuendo and double-entendre humor (i.e., never "stay tuned for (name of show)," sometimes with a mundane-by-comparison-but-still-perhaps-humorous plot that was common in the old days), and never for something that would actually give the station money. An interesting thing, however, is that on networks that do this, this is generally the only advertisement shown between one show and the next; once the pushed credits are over, the next show immediately starts, greatly reducing the amount of time a viewer isn't "attached" to a show and likely to turn the station. On those that don't do this, the very same advertisement appears a few seconds later. On some networks, the credits are pushed back for the start of the next program, to prevent channel switching (this is particularly common if the next program happens to be another episode of the program just ending). A variation of this for a channel that airs movies (like FX, TNT or Freeform): the beginning of the next movie/TV show plays while the movie's end credits are pushed back.

In some cases, the channel doesn't play an ad, but instead runs a preview of the upcoming evening news, especially if the show just ending immediately precedes the news.

It should be noted that rarely is this controlled by the studio which made the show, and was far more often done by the network or, in the case of syndication, local affiliate which is showing the episode, often placing news teasers in the other "window". This variant was notably parodied in The Simpsons episode "Bart Gets Famous".

This is especially annoying if a show tends to do The Stinger during the Credits Roll, and is squished so you can't see it.

Also referred to as "Credit Squeeze" (Charlie Brooker often uses this term) or "Credit Crunch" (after the term for the 2008 Global Recession).

There are two common versions of this: the broadcaster will simply squish the credits to the side, or the bottom of the screen, run a promo alongside them, and maybe give them back the whole screen by the time the Vanity Plates (considered by broadcasters the most important part of the credits) appear. Some networks, however, show the plates first, then cut to a specially designed display with the credits on them. In the case of shows with long credit lists, such as movies, it's common for the closing credits to zip by at light speed.