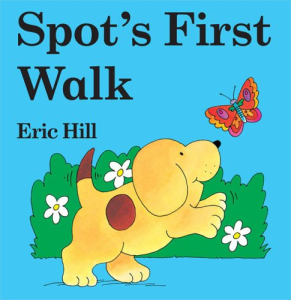 With a smile and a laugh he can light up your day, like the sun peeking over the hill...
Advertisement:

Spot the Dog is, collectively, a set of British animated TV shorts (39 five-minute shorts and eight 15-minute shorts) and two half-hour specials based on the books by Eric Hill. (There are over a hundred of the books themselves.) It centers on the puppy Spot, his family and his friends, and to a much lesser extent, the other inhabitants of the land in which Spot lives.

The series can be divided into six series:

The first and second series of The Adventures of Spot, as well as Spot's Musical Adventures, was released in the United Kingdom as animated storybooks, narrated by Paul Nicholas. When Disney released the show in the United States, they made a half-hearted attempt to Americanize it. Spot was revoiced by Jonathan Taylor Thomas in The Adventures of Spot and Haley-Joel Osment in Spot's Musical Adventures (retitled Discover Spot in the United States), the other characters were given their own voices, and the narration was changed. However, the fact that none of the characters' mouths moved when they were speaking (this was, of course, initially an animated storybook) confused many parents who actually watched the show along with their kids. This was made worse for those who was introduced to the show by the specials, which were intended to be proper animated features and the characters' mouths do move when they speak. Both It's Fun to Learn With Spot phases were never released in the United States. Peter Hawkins, now deceased, was involved in the series for a short stint as narrator of the first phase of It's Fun to Learn With Spot, but the second phase of It's Fun to Learn With Spot retained Paul Nicholas as the narrator. Spot's Musical Adventures was narrated by comedian Jane Horrocks in the United Kingdom.

After the release of Spot's Musical Adventures, the producers of the show retroactively re-voiced the British versions of both The Adventures of Spot and It's Fun to Learn With Spot with Jane Horrocks as the narrator.