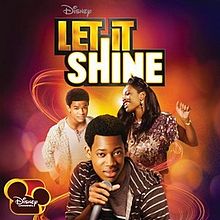 The truth is in the music.
Advertisement:

Let It Shine is a 2012 Disney Channel musical. Based on the classic play Cyrano de Bergerac, it's notable in that all the main characters are black.

The film stars a young busboy named Cyrus who dreams of being a hip-hop rapper, but the words of his peers and his pastor father make it seem as though he would never succeed. Under the name "Truth", he enters a contest sponsored by the same music label that once hired a childhood friend of his (named "Roxie" Andrews). However, due to a mistake when looking at the photograph Cyrus sent in, it is his best friend Kris that ends up with the glory. At first, Cyrus accepts staying in the background and helping Kris try to win Roxie's heart, but he eventually gains some self-respect, learns to stand up for himself, convinces his father that hip-hop can be a positive thing, and succeeds at his dream.