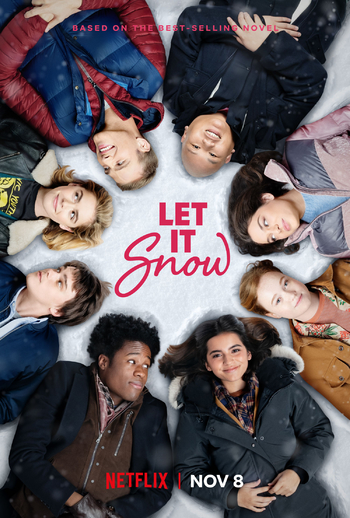 "Snow has the power to bring us together. And sometimes, just for a moment, and especially on Christmas Eve, that's exactly what we need."
— Tin Foil Woman, Opening Narration
Advertisement:

A 2019 Netflix holiday Rom Com film, based on the book of the same name by Maureen Johnson, John Green, and Lauren Myracle. Directed by Luke Snellin, it features an Ensemble Cast set in the fictional town of Laurel, Illinois. First and foremost, it's a great example of the benefits of taking your typical cliche Made-for-TV Christmas film and actually taking the characters seriously, while also demonstrating that such stories don't need to be straight or white.

The film revolves around the lives of several high schoolers experiencing a Christmas-Eve blizzard in their hometown of Laurel, and the ways in which they re-examine their personal relationships.