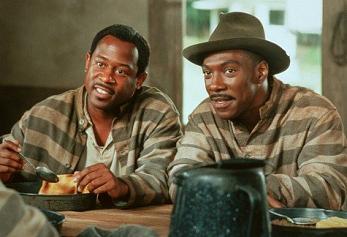 In 1932 New York City, Claude Banks (Lawrence) gets caught up in a bootlegging scheme after a fateful run in with no-good Ray Gibson (Murphy). While making the sale in the Deep South, the boys get involved in a crooked game of cards and end up framed for the murder of the local card sharp. Sentenced to life, their friendship is forged by proximity and the dream of escape.

At first glance, it appears to be a normal Eddie Murphy or Martin Lawrence screwball comedy, but it actually has surprising Hidden Depths as it follows several decades of the main characters' unlikely friendship, fitting it firmly in the Dramedy territory.

Ned Beatty (as a kindly prison official), Anthony Anderson (as the prisoner who does the cooking), Bernie Mac (as a prisoner who practices Situational Sexuality), and R. Lee Ermey (as the Big Bad after a few Time Skip's) also appear.