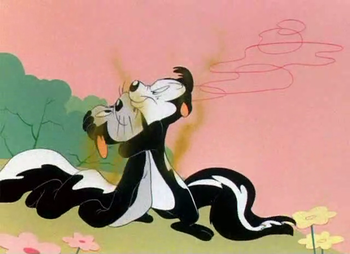 "Where have I been all your life?"
Advertisement:

"Odor-Able Kitty" is a 1945 Looney Tunes cartoon directed by Chuck Jones. Notable for being the first appearance of Pepé Le Pew (who was called Henry in this cartoon, but will be referred to as Pepé for clarity's sake).

The story follows a homeless cat who gets sick of being bullied by every human and dog that crosses his path, so he gets the idea of using paint to disguise himself as a skunk so everyone will leave him alone; and it works. The only problem is, his new appearance attracts the attention of a certain amorous French skunk who mistakes him for a female skunk and gets... frisky to say the least. His every attempt to escape his lovesick pursuer is foiled and his only savior is the skunk's wife who appears with their kids and beats the tar out of her husband, allowing the cat to make his get-a-way. The cat washes off his disguise and continues to happily let himself get beaten by the humans and dog from earlier and comments, "Ah, this is the life".