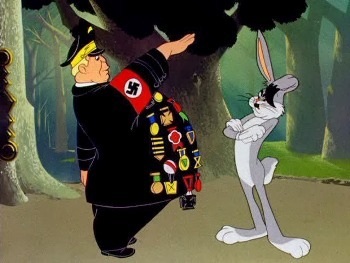 You saw Hermann Göring standing there full of decorations, then all of a sudden a rabbit showed up and took all the decorations off, and stuff like that. And we didn't care for that.
German prison of war soldier Hans Goebler, reflecting on the fact that US troops showed this cartoon to their prisoners of war in 1945. Quoted from an interview, read in "Lone Star Stalag: German Prisoners of War at Camp Hearne", 2004, by Michael R. Xaters, Marl Long and William Dickens.
Advertisement:

"Herr Meets Hare" is a 1945 Looney Tunes War Time Cartoon directed by Friz Freleng. It features Bugs Bunny outwitting Nazi figure Hermann Göring and meeting Adolf Hitler in a final showdown. This would also be the last wartime propaganda cartoon released by Warners' animation department. Only four months after its release, Nazi Germany surrendered. It was allegedly shown to German prisoners of war, who didn't like it.

Like most World War II propaganda cartoons, "Herr Meets Hare" was kept out of circulation after the war due to Values Dissonance and it being an Unintentional Period Piece, though Cartoon Network (who had initially banned it in 2001 from their "June Bugs" marathon that would have aired every Bugs Bunny cartoon ever made) aired this as part of their ToonHeads World War II special and it's released on the sixth volume of the Looney Tunes Golden Collection with optional audio commentary by Greg Ford.