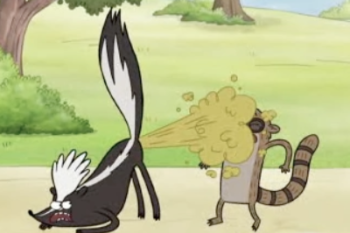 "Dead skunk in the middle of the road
and it's stinking to high heaven"
— Loudon Wainwright III
Advertisement:

You know what this is going to be about. Skunks stink. It's a known fact. What isn't so well known (at least among fiction creators) is why they smell. Some works portray it correctly, as a stream of stinky liquid coming out the butt. (The glands are very near the anus proper. Cats and dogs have the glands too, but for marking territory.) Others show a cloud of gas coming out the butt, maybe accompanied by farting sounds. Sometimes the stuff comes out the tail, an example of Artistic License – Biology which can be less squicky than the former two. Perhaps unfairest of all, skunks are frequently shown as just plain stinky, 24/7! Not surprising, therefore, if Visible Odor comes into play.

That skunk spray smells rotten is Truth in Television; it can make a bear clear out! It's so vile that it adheres to the clothing and hair of anyone within nose-shot. The spray is also very durable and extremely poisonous, getting even worse in water rather than washing off. And if you live in the country, you know when a skunk's been hit, even if it's a good mile away! And a dead skunk smells worse than a live one.

It should be noted that skunks have a limited amount of spray, and if they run out, it can take a couple of weeks for them to get it back. That's why they threaten you as much as they think they can get away with — "Stop, or I Will Shoot!" in animal form (which might explain the trouble MythBusters had acquiring some of the spray). Their distinctive coloration (not necessarily the skunk stripe) relates to this as well, serving as a warning signal to both humans and wildlife. And the spray isn't total protection, for the skunk's enemies include the owl — owls have a poor sense of smell, so skunks scramble for the nearest hole or thistle branch.

Contrary to their harmless-looking images, truly-evil skunks are a commonplace in fiction, due to the fact their stinky and poisonous smells, among other things, associate them with the malice, because Evil Smells Bad. Skunks are rarely portrayed as good in most of fiction (and if they are, that's Played for Laughs), and are often seen as Unpleasant Animal Counterpart where the Weasel Mascot (or Frisky Ferret specifically) exists.

A common subversion of this trope, in works with Talking Animals, is for the skunk character to be upset for someone assuming it to be true (and may make it true in retaliation), or be grateful if they don't bring it up. Another common variant is to only have the skunk spray when startled, in place of a Jump Scare (and make it Faux Affably Evil if not a Running Gag).

It is possible to remove the stink glands via surgery, and this is obviously standard for pet skunks. Still, having a skunk standing at your door might be better than a dog to deter potential thieves. For someone who has already been skunked, sadly, fiction's favorite remedy to get rid of the smell, a bath in tomato juice, doesn't actually work. Fortunately, the actual remedy to remove the smell

is no more difficult, and less gross in its own right: merely scrubbing with a combination of peroxide, baking soda and detergent will break down the smelly compounds and get you back to your original scent.