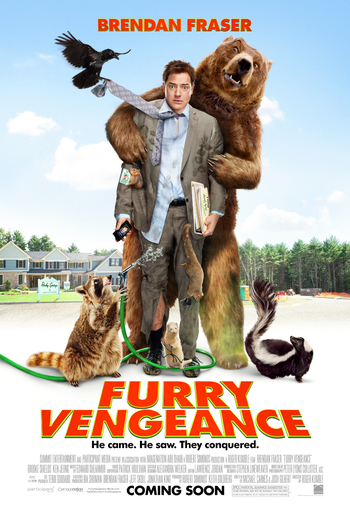 Furry Vengeance is a 2010 comedy movie starring Brendan Fraser and directed by Roger Kumble. Ambitious Chicago real estate developer Dan Sanders (Fraser) is given the task of turning the forest of Rocky Springs into a residential development by Lyman Enterprises' CEO Neal Lyman (Ken Jeong). Dan uproots his wife, Tammy (Brooke Shields), and teenage son, Tyler (Matt Prokop), from Chicago to a small Oregon town to take over management duties. Tyler is very unhappy with the relocation and lets dad know it every chance he gets. Tammy tries to make the best of it, teaching at a local high school and chairing the upcoming forest festival.The same cunning, super-smart woodland animals that forced Dan's predecessor to quit the project, though, set their sights on driving Dan crazy. At every turn, they aim to do bodily harm to him, embarrass him, and generally make him look like a crazy man. No one — not Tammy or Tyler or local security professional Wilson (Toby Huss) — believes him when he tells them the creatures of the forest have targeted him to drive Dan out of his mind.