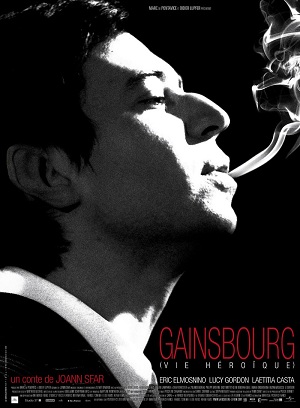 Also known as Gainsbourg (Vie Héroïque) ("heroic life" in French), Gainsbourg is a surreal 2010 biopic about Serge Gainsbourg, the French Singer-Songwriter. The man is portrayed by actor Éric Elmosnino.

It begins during his childhood in Nazi-occupied France (he was the child of Russian Jews and was eventually forced into hiding to escape The Holocaust) and follows him throughout his life.

The film is scant on specific details, so those unfamiliar with the man's work may be a little lost at times.