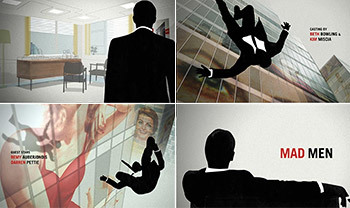 "[Pom Pom will] spend a 30 million dollar budget, trying as hard as he can to make it look like he only spent a few hundred thousand. The first step is to spend millions on a hand-drawn title sequence that looks like it was made by some Junior High kid during Pre-Algebra."
— Strong Bad, Strong Bad Email #203, "independent"
Advertisement:

A live-action movie or TV show has an animated Artistic Title sequence with all sorts of wacky hijinks. It may foreshadow the plot, set up the backstory, or just be emblematic of the story's theme. An Animated Credits Opening sometimes means the film will be a comedy or at least a family movie, but not always.

Very popular in the films and television series of The '60s, with a nostalgic, Retro revival in The '80s & the early 90's. Since the mid 90's, filmmakers' desire to get to the action as quickly as possible has resulted in this trope largely being discarded in favor of Creative Closing Credits.

[After watching an animated opening credits for Even Stevens or Sister, Sister]
Statler: Well, what do you think of that for an entrance?
Waldorf: I don't know. But maybe they can use that technique again for their preschool counterpart.
Both: Do-ho-ho-ho-ho-ho-hoh!