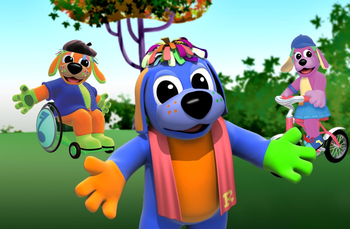 Raggs is a live action and animated musical preschool television series originally produced in Sydney, Australia, with additional U.S. production in English and Spanish. Raggs' expansive library includes 195 finished half hour episodes and 200 original songs in multiple languages. The entertaining and educational series is based on the original characters created by Toni Steedman, a Charlotte, NC, advertising executive, for her then six‐year‐old daughter Alison. The rock n’ roll story of five canine characters is growing an international brand that includes TV distribution, multi-platform digital distribution, CDs, DVDs, toys, books and touring. With over 4,000 live performances around the world, The Raggs Band’s touring, live show and event experience has expanded to include a new partnership called "Play at Palladium with Raggs" with the Palladium Hotel Group at their resorts in Mexico and the Caribbean. It was broadcast on 4 February 2008 on PBS Kids In 2014, The Raggs Band reunited to record 20 of the top classic kids songs to accompany new Raggs animation to be included in the show and distributed on the Raggs YouTube channel, RaggsTV. Raggs and all rights are owned by Blue Socks Media, Charlotte, NC.