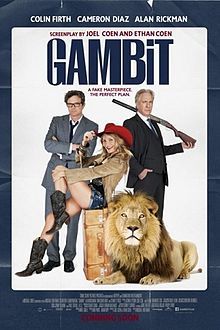 Gambit is a 2012 film directed by Michael Hoffman, starring Colin Firth, Cameron Diaz, Alan Rickman and Stanley Tucci. It's sort of a remake of the 1966 crime caper film by the same name starring Shirley MacLaine and Michael Caine.

Harry Deane (Firth) is an art curator for Lord Shabandar (Rickman), a thoroughly unpleasant, but very rich man. Deane knows that Shabandar has an obsession with Claude Monet's Haystacks

series, so he sets up a scheme where he enlists rodeo queen PJ Puznowski (Diaz) to fake owning one of the Haystacks paintings (actually a forgery by Deane's friend, the Major) so that they can swindle Shabandar for a sizable sum. Of course, everything goes wrong from the outset, but Puznowski starts to realize that maybe there's a little more to Deane than she thought.

Not to be confused with the Marvel Comics character of the same name. Or the game show.