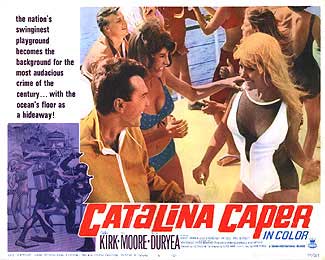 Catalina Caper (also known as Never Steal Anything Wet) is a campy 1967 musical comedy mystery film from Crown International Pictures, directed by Lee Sholem and starring Tommy Kirk. One of the last entries (if not the last) in the '60s beach party film genre exemplified by Beach Blanket Bingo, this film blends the beach format with a standard crime-caper comedy.

Tommy Kirk's other beach films include It's a Bikini World (1967), and two American International Pictures features, Pajama Party (1965) and The Ghost in the Invisible Bikini (1966).

This film was shot on location on and around Santa Catalina Island, California.

While about half the movie is just music numbers featuring teens dancing to music (at one point being serenaded by Little Richardnote who is clearly stoned out of his gourd), there is an actual plot that noses in from time to time. An ancient scroll is stolen from a museum in Los Angeles. The next day, teenager Don Pringle (Kirk) arrives on Catalina Island with his friend Charlie Moss (Brian Cutler), who is determined to teach the Arizona boy what the swingin' beach party scene is all about, and also hook him up with his sister, Tina (Venita Wolf). However, on the boat ride over, Don is taken by the exotic beauty of vaguely foreign Katrina Corelli (Ulla Strömstedt) though she's on the island to accompany her fiance, the vaguely threatening Angelo (Lyle Waggoner). Meanwhile, Tad Duval (Peter Duryea), has arrived on the island along with his parents (Del Moore and Sue Casey); due to past history, he suspects they're up to something criminal. In reality, the parents have hired a burglar, Larry (Jim Begg), to steal the scroll from the museum so they can craft a forgery and sell it to their rich foreign mark Dino Lakopolis (Lee Deane). All the while, they're being trailed by hapless insurance investigator Fingers O'Toole (Robert Donner), who just wants to recover the scroll for the museum and hopefully arrest the larcenous Duvals in the process. After one of Lakopolis's men attempts to steal the scroll from the Duvals, it winds up in the water — leading to not one, but two underwater scuba-diving knife fights in the film as the teens get wise to the scheme.

Will the scroll be recovered? Will Don get lucky with Katrina? Will Fingers have another pratfall that fails to garner any laughs?

The movie is largely obscure now, though it was featured in the second season of Mystery Science Theater 3000 in 1990. For details on that episode, go to the episode recap page.