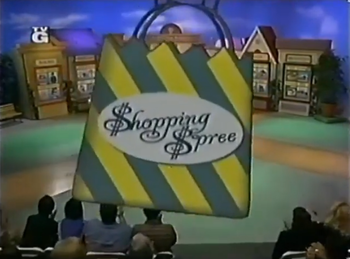 "What if every time you went window shopping, someone came along right after you and bought you everything you wanted? Sounds like a dream, we know. But dreams come true... on Shopping Spree!"
—Opening Narration by announcer Burton Richardson
Advertisement:

Shopping Spree was a Game Show created by Jay Wolpert that aired on The Family Channel from 1996-97.

The show involved two two-member teams, with one member attempting to "buy" prizes for the other from six stores...but the catch is that neither teammate has met each other prior to the show. To help their teammate, the buyee wears a number of different items on their person which serve as clues to their interests and personality, and also strikes a pose to do the same thing.

Each of the six on-set themed "stores"—which changed from day to day—had four possible prizes, with one prize pre-selected by the buyee prior to the show. The buyer runs to each store and attempts to pick out the prize their teammate chose. If their first guess was incorrect, host Ron Pearson read a clue to the right answer and they kept guessing until they found the correct item. The first team set a base time for picking all 6 prizes; the second team then had to beat that time to win.

Notable as Wolpert's longest-running show as an independent producer: a whole season-and-a-half! In this case, the show didn't last beyond that due to The Family Channel having been bought out by Rupert Murdoch and unsuccessfully reborn as Fox Family; The New Shop 'Til You Drop got the ax for the same reason.